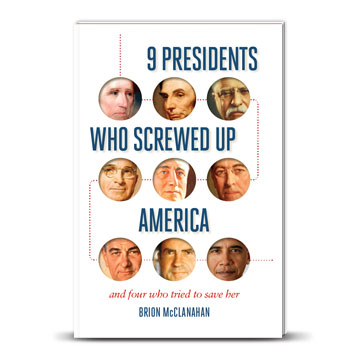 Of the forty-four presidents who have led the United States, nine made mistakes that permanently scarred the nation. Which nine? Brion McClanahan, author of The Politically Incorrect Guide to the Founding Fathers and The Founding Fathers’ Guide to the Constitution, will surprise readers with his list, which he supports with exhaustive and entertaining evidence. 9 Presidents Who Screwed Up America is a new look back at American history that unabashedly places blame for our nation’s current problems on the backs of nine very flawed men.

Available wherever books are sold, or purchase an autographed copy below.

“Every once in a while American historians will be polled regarding the men they consider the greatest presidents. Without fail, they choose those people most dedicated to the expansion of government. In this outstanding book, Brion McClanahan blasts these historians to smithereens, and reveals the true history of the dangerous men who are known as our great presidents. It’s about time someone did!”
–Tom Woods, author of Nullification: How to Resist Federal Tyranny in the 21st Century and The Politically Incorrect Guide™ to American History

“This book is both a fascinating read by a master historian and a necessary guide for any voter.”
–Kevin R. C. Gutzman, author of James Madison and the Making of America and The Politically Incorrect Guide™ to the Constitution

“Congratulations to Brion McClanahan. As a true American historian, he tells the truth about the rogues’ gallery of US presidents, who have stolen our freedoms, and killed millions in the process. And what great prose!”
–Llewellyn H. Rockwell Jr., founding chairman of the Ludwig von Mises Institute

“Mr. McClanahan has a hit on his hands, or should. He lays out a case, in plain English, how each of nine presidents “Screwed up” our country. It is a fascinating and factual accounting of presidential usurpation of power…This book is entertaining and educational – a feat which is all too difficult to achieve. I must say, I am smarter for reading it.”
–Brent Smith, The Daily Caller

It Didn’t Start with Barack Obama

America is well on her way to becoming a banana republic. With presidents signing patently unconstitutional legislation, refusing to enforce laws they don’t like, and even making appointments without the advice and consent of the Senate, it’s clear that the federal Republic our Constitution established is hanging by a thread. And yet the chances that a president who has flouted our founding document and the very rule of law will be impeached are slim to none.

Americans seem to have resigned ourselves to the exact form of government that the framers
and ratifiers of our Constitution feared most: the tyranny of an elected monarch. The executive branch of the U.S. federal government has grown so far beyond the bounds set for it in our
Constitution that Americans can no longer claim to govern ourselves. We only get the chance to pick the man who will spend four years legislating unilaterally with his pen, waging undeclared wars, and usurping still more powers that the people and the states never delegated to the federal government in the first place.

But how did we get here?

Step by unconstitutional step, as historian Brion McClanahan reveals in Nine Presidents Who Screwed Up America—And Four Who Tried to Save Her. McClanahan’s ranking of the presidents is surprising—because he judges them on the only true standard: whether or not they kept their oath of office to “preserve, protect and defend the Constitution of the United States.”

Available wherever books are sold, or purchase an autographed copy below.