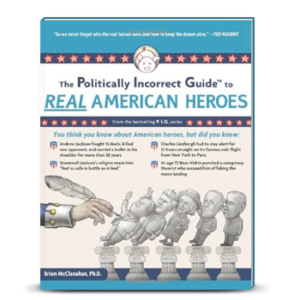 As politicians sling dirt at each other, America desperately needs a few real heroes. Tragically, liberal historians and educators have virtually erased traditional American heroes from history. According to the Left, the Founding Fathers were not noble architects of America, but selfish demagogues. And self–made entrepreneurs like Rockefeller were robber–barons and corporate polluters.

In his new book, The Politically Incorrect Guide™ to Real American Heroes, author Brion McClanahan rescues the legendary deeds of the greatest Americans and shows why we ought to venerate heroes like Captain John Smith, adventurer Daniel Boone, General Robert E. Lee and many more.

The Politically Incorrect Guide™ to Real American Heroes not only resuscitates America’s forgotten heroes, but sheds light on the Left’s most cherished figures, including Franklin Delano Roosevelt and the Kennedys.

With biting wit and devastating detail, McClanahan strikes back against the multicultural narrative peddled by liberal historians who make heroes out of pop culture icons and corrupt politicians. In America’s hour of peril, McClanahan’s book is a timely and entertaining call to remember the heritage of this great nation and the heroes who built it.

Now available wherever books are sold, or get a signed copy for $25. Price includes shipping and handling. Click the “Buy Now” button below for your autographed copy!

UNTIL RECENTLY every American knew about Daniel Boone and Davy Crockett. American kids remembered how Andrew Jackson chased the British at the Battle of New Orleans, they could tell you when John Paul Jones said “I have not yet begun to fight,” and they knew why Stephen Decatur had gallantly burned the Philadelphia. Schoolchildren learned about John Smith and Pocahontas, and they understood what made George Washington the father of our country. They celebrated the exploits of Robert E. Lee and Stonewall Jackson alongside those of Union generals. They remembered how ex-slave Booker T. Washington lifted himself to hard-won success, and they knew about the American inventors and titans of industry whose genius and perseverance had raised living standards for millions of people around the world.

Americans have always been liberty-loving, hardworking, proud, and, yes, heroic people. But today we’re cut off from our illustrious past. Now it’s Hollywood actors, professional athletes, pop artists, reality TV stars, and a sprinkling of good-looking liberal politicians who seem to soak up all the public’s admiration.

In Praise of The Politically Incorrect Guide to Real American Heroes

“You have to read a book that explains why well known men like Robert E. Lee and little known women like Augusta Jane Evans are American heroes, and why PC favorites like the Kennedys and Margaret Sanger should never have been given the title in the first place.”
–Clint Johnson, author of The Politically Incorrect Guide&™ to the South

“Forgetting the builders of our nation will lead to the collapse of our nation. Brion McClanahan’s Politically Incorrect Guide to Real American Heroes can help us avoid collapse and extend American civilization to future generations.”
–Leo Thorsness, colonel USAF (Ret.), Medal of Honor recipient, POW in Vietnam