This shouldn’t be happening in our society, but, as you might expect, Bessner chalks it up to ignorant conservative hayseeds who don’t seem to appreciate the nuances and rigorous academic standards of professional history.

Or maybe they are just racist. He can’t decide.

Either way, professional history, he argues, is vital to our success as a “nation.”

I think Americans are generally just tired of “historians” like Bessner and other leftist nobs hectoring to them while politicizing every issue in the name of “history.”

Take for example this Tweet from “twitterhistorian” Manisha Sinha, the Indian born “leading historian” on American abolitionism. This is like calling Nikki Hailey the leading American political figure on Confederate symbols. 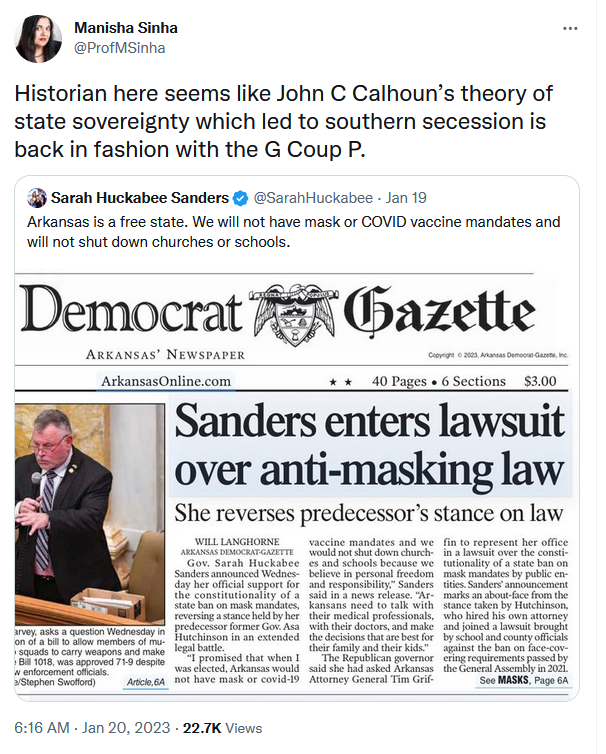 Sinha’s entire social media presence is dedicated to leftist activism, except she calls it history.

Never mind that Sinha doesn’t seem to grasp that a lawsuit over a State law in a State court has nothing to do with the relationship between the general government and the States, or that Calhoun’s “theory of state sovereignty” was in fact anti-secession. Those tedious little facts don’t matter. All that matters is RACISM and SLAVERY if we invoke Calhoun and the “G Coup P.”

We know many “history” courses are in fact a cover for leftist propaganda. Ron DeSantis had a wonderful response to a Florida decision to reject an “African-American History” course count as an AP credit. Why? Because they weren’t really teaching “African-American History.” The curriculum contained sections on gender identity and defunding the police.

Courses like this have led to the movement to remove or “contextualize” not only Confederate monuments–the low hanging fruit–but also historic sites and those dedicated to the founding generation.

They are all racist, too, you know?

History is a weapon, not a serious scholarly effort to understand the past on its own terms.

That is why people recoil at the 1619 Project. It’s aim is entirely political. So was the 1776 Commission Report, by the way.

Without question, history often leads to political discussions. At its best, history inspires conversation and inquiry. But for people like Sinha, Bessner, and 1619 Project creator Nikole Hannah-Jones, history serves as a means to gain a moral advantage over their political opponents.

Force them to genuflect to their morally superior leftist masters.

Did I mention that Sinha’s favorite political figure is Charles Sumner?

That more than anything else speaks volumes.

I discuss the “dangerous” trend to eliminate “professional history” on Episode 764 of The Brion McClanahan Show.