Over the weekend, woke leftist “scholar” Nikole Hannah-Jones made some comments about the atomic weapons strike on Japan in 1945. She said felt “shame” when visiting Hiroshima and thought of the “fascism” in the American South. When some people challenged her, she wrote this: 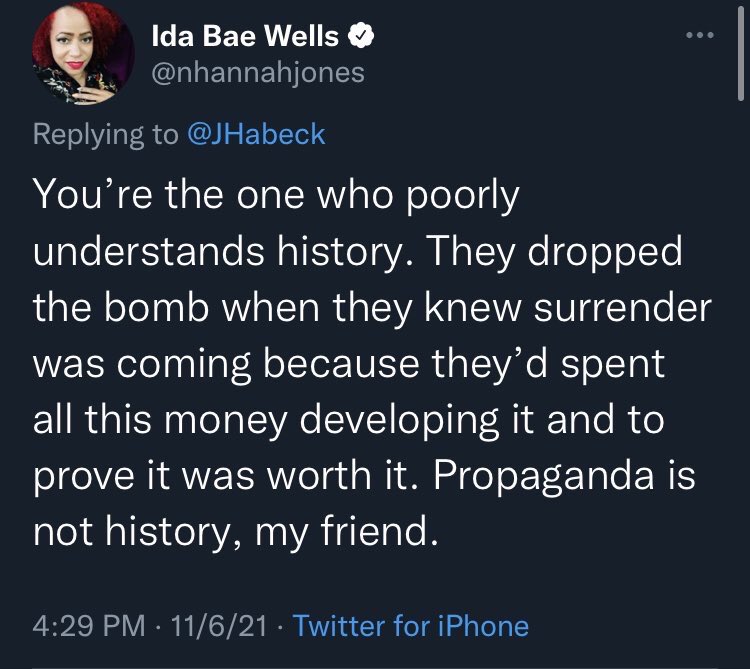 Her stupidity is boundless, but this brings up an interesting historical debate. Did the bomb end the war in the Pacific?

Did the United States “know surrender was coming”? No, though the Japanese were exploring the possibility. Hardliners didn’t want to surrender. But it wasn’t the bomb that eventually led to Japanese capitulation, it was the Soviet Union.

And yet, the Japanese government still wouldn’t surrender. But they feared a Soviet invasion and had attempted to open talks toward a “conditional” surrender. The United States wouldn’t budge.

Truman also worried about Soviet aggression in Asia and Europe and wanted to show the Soviets that he wasn’t afraid to use “the big stuff.”

Dropping the second bomb was more about the Cold War than World War II.

Either way, the bombs are generally viewed as unnecessary and little more than punitive. But they did change warfare by making civilians the primary target of weapons of mass destruction. Civilians had been targets before, but never like this.

Ward Wilson published a fun little book describing the “Five Myths About Nuclear Weapons.” The bomb ending the war is one of them.

I talk about the bomb, World War II, and Wilson on Episode 547 of The Brion McClanahan Show.